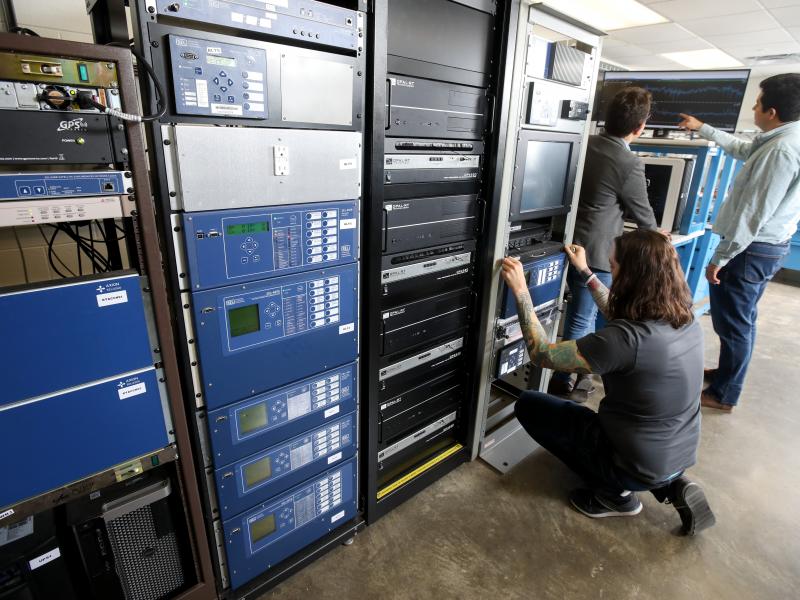 TROY, NY—Inter-lab collaboration between the New York Power Authority (NYPA) and Rensselaer Polytechnic Institute is paving the way for a greener and more resilient power grid – and attracting interest from businesses and government in the process.

The Analysis Laboratory for Synchrophasor and Electrical Energy Technology (ALSETLab) at Rensselaer in collaboration with the Advanced Grid Innovation Lab for Energy (AGILe) at NYPA were recently awarded two large projects from the New York State Energy Research and Development Authority (NYSERDA).
The projects support Governor Andrew M. Cuomo’s Green New Deal initiative, the nation’s leading clean energy and jobs agenda, which will provide for New York state’s transition to clean energy, spurring the growth of the green economy and mandating New York's power be 100% clean and carbon-free by 2040, one of the most aggressive goals in the U.S.

Alicia Barton, president and CEO, NYSERDA, said, “Developing the technology needed for the statewide economy-wide clean energy transition outlined in Governor Cuomo’s clean energy and climate plan requires the development of disruptive and innovative technologies. These projects will encompass the forward thinking needed to create a reliable, resilient grid of the future that incorporates renewable energy resources such as solar, wind, and storage.”

ALSETLab is directed by Luigi Vanfretti, an associate professor of electrical engineering at Rensselaer, and its name (if you read the acronym backward) pays tribute to his hero, legendary inventor Nikola Tesla. AGILe was established in 2017 by NYPA, in partnership with a number of New York stakeholders, to promote collaborative research that can help modernize and strengthen the state’s electric grid and facilitate development and potential commercialization of new technologies.

“To be able to have a cleaner grid, the prerequisite is to have better monitoring, control, and protection,” Vanfretti said. “We are building an infrastructure that could potentially be deployed easily without many years of development and without interoperability problems.”

Vanfretti’s team will support a $550,000 project led by NYPA’s Research, Technology Development and Innovation team and co-funded by NYSERDA, which will harness the power of deep-learning algorithms to develop software capable of identifying and predicting system issues, alerting operators, and recommending possible solutions.

“We will use a lot of simulated data to train machine-learning algorithms,” Vanfretti said. “The recommender system we create will be able to tell you, based on real-time indicators and thousands of simulations, if we found a similar situation that says, if you apply a certain change you will get an improvement. Just as Netflix recommends shows you would like, this software will recommend actions that will improve the resiliency of the power system.”

A second $480,000 project, led by NYPA in partnership with Vanfretti, aims to develop an interpreter tool that will allow power system modeling and simulation to be shared and understood between multiple simulation software tools and organizations. This will become increasingly necessary as operators look to study and incorporate new technologies, like solar and wind energy, into the existing grid.

More broadly, ALSETLab is creating advanced modeling and simulation technologies for the power grid and collecting data to learn more about how the grid performs. This will allow researchers to develop and test sensors, software, and code that they hope, one day, will interact within a nationwide power grid network.

About NYPA
NYPA is the largest state public power organization in the nation, operating 16 generating facilities and more than 1,400 circuit-miles of transmission lines. More than 70 percent of the electricity NYPA produces is clean renewable hydropower. NYPA uses no tax money or state credit. It finances its operations through the sale of bonds and revenues earned in large part through sales of electricity. For more information visit www.nypa.gov and follow us on Twitter @NYPAenergy, Facebook, Instagram, Tumblr and LinkedIn.

Governor Andrew M. Cuomo’s Green New Deal is the most aggressive climate change program in the nation and puts the state on a path to being entirely carbon-neutral across all sectors of the economy, including power generation, transportation, buildings, industry and agriculture.  The Governor’s program also establishes a goal to achieve a zero-carbon emissions electricity sector by 2040, faster than any state in the nation. The recently passed Climate Leadership and Community Protection Act (CLCPA) mandates several of the Governor’s ambitious Green New Deal clean energy targets: installing nine gigawatts of offshore wind by 2035; six gigawatts of distributed solar by 2025 and three gigawatts of energy storage by 2030. The CLCPA also calls for an orderly and just transition to clean energy, creating jobs while spurring a green economy. It builds on New York’s unprecedented ramp-up of clean energy including a $2.9 billion investment in 46 large-scale renewable projects across the state, the creation of more than 150,000 jobs in New York’s clean energy sector, and 1,700% growth in the distributed solar sector since 2012. The CLCPA also directs New York State's agencies and authorities to work collaboratively with stakeholders to develop a plan to reduce greenhouse gas emissions 85% from 1990 levels by 2050, and to work toward a goal of investing 40 percent of clean energy and energy efficiency resources to benefit disadvantaged communities. ​