Mona Mostafa Hella received the Ph.D. degree, in 2001, from The Ohio-State University, Columbus, Ohio, in Electrical Engineering. She was a senior designer at Spirea AB, Stockholm, Sweden working on CMOS power amplifiers (2000-2001). From 2001 to 2003, she was a senior circuit designer at RF Micro Devices Inc, Billerica, MA working on Optical communication circuits and silicon-based wireless systems. She joined the Electrical, Computer and Systems Engineering department at Rensselaer Polytechnic Institute in 2004 where she is now a full associate professor. She is a research thrust leader for the National Science Foundation Engineering Research Center (ERC) on Light Enabled Systems and Applications (LESA).

Dr. Hella has served as the associate editor of IEEE transactions on Very Large Scale Integration from 2011 - 2014. Since 2010, she has served on the technical program committee of the Radio Frequency Integrated Circuits Design Symposium (RFIC). She served on the administrative committee of the Microwave Theory and Techniques society from 2007 to 2009. Her research interests include the areas of mm-wave and THz circuits and systems, energy harvesting and sensor design. She was a Fulbright scholar in 2015 and an IEEE senior member in 2016. 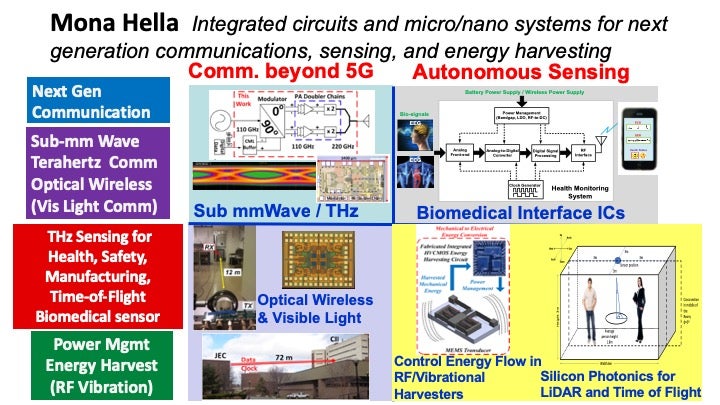