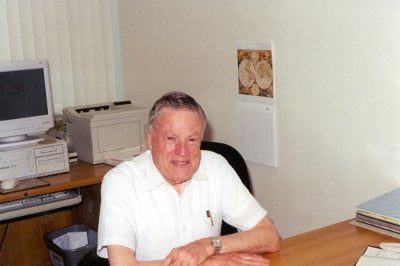 Prof. Freeman was a pioneer in image processing and computer graphics.

Former ECSE faculty member, Herb Freeman, passed away on November 15, 2020.  Prof. Freeman was with ECSE from 1975 to 1985 and was the director of the Image Processing Laboratory during that period. He was a pioneer in image processing, computer graphics, and pattern recognition.  He was active in professional societies and his many contributions have been recognized by multiple awards. The ECSE community extends our condolences to Prof. Freeman’s family and friends.

Below are some thoughts and memories of Prof. Freeman by ECSE faculty and students, present and past.

Prof. Herb Freeman, a major force in the ECSE department from 1975 to 1985, died on Nov. 15 at the age of 94.  Herb was an early pioneer in the field of pattern recognition and image processing. During his decade at RPI, Herb played a key role in building up courses and research in computer engineering.

The Capital Region was the place Herb considered to be his home. Born in Germany, Herb and his family fled Nazi oppression in 1936.  They settled in the Cohoes, where his father, a physician, established a practice. Herb graduated from Cohoes High School as valedictorian, then studied electrical engineering at Union College, where he joined the Kappa Nu fraternity.  Herb left the Capital Region to attend grad school at Columbia and went on to chair the electrical engineering department at NYU before returning to the area to join RPI.

Herb hired and mentored many faculty in this department, including bringing me onboard in 1978.  He established a wide range of courses, including Image Processing, Computer Graphics, Software Engineering and Artificial Intelligence.  By offering cutting-edge courses, RPI was able to attract numerous full-time and part-time grad students from employers such as GE.  An interesting bit of history--Herb was instrumental in persuading what was then the Electrical and Systems Engineering Department to add the word 'Computer' to its name.  That took a lot of work!

Herb established the Image Processing Lab at RPI, which endured for many years after he left RPI and moved to Rutgers.  One of the more challenging research topics was automatic, high-quality placement of labels on cartographic maps.  This was subsequently commercialized by his company, MapText, and then used by the U.S. Census Bureau.  Twelve of Herb's students obtained doctorates from RPI. He also hosted the first IEEE Computer Society Pattern Recognition and Image Processing conference at RPI in 1977.

This note has focused on Herb's contributions during his years at RPI. His many other contributions to the profession will be recognized in the January 2021 issue of the International Association for Pattern Recognition (IAPR) newsletter.  His autobiography, Cobblestones: The Story of My Life, is available from Amazon.  The IEEE's Center for the History of Electrical Engineering interviewed him for an oral history; see https://ethw.org/Oral-History:Herbert_Freeman .

Herb and I were able to maintain our professional and personal relationship over the years.  I was fortunate to be able to see him one last time the night before he passed away.  The next time you look at a map, remember that it is the algorithms that Herb and his grad students developed at RPI that have helped to place text on maps in an efficient, visually attractive way.

Herb Freeman was already established as a Professor in the ECSE Department at RPI when I first arrived in 1976.  At that time, he went out of his way to help me get started and established here.  In a specific instance, he personally introduced and recommended me and my research to Mr. Elias Schutzman, then the NSF program manager for Circuits and Signal Processing at the National Science Foundation. I went on to earn substantial research support from that government agency in subsequent years. Herb helped many new faculty members get started over the years, and I was one of them.  Thank you Herb.

Herb joined RPI at the beginning of an exciting time for the School of Engineering.  The School just got approval from President George Low to launch its Engineering Initiatives Program, focused on hiring new engineering faculty and establishing three centers.  I was the first hire under that program in the fall of 1977 and given the charge to create a broad-based Interactive Computer Graphics Center (original name, ICGC) that combined research and interactive computer graphics support for instruction.  Engineering Dean George Ansell authorized the purchase of 36 highly interactive graphic stations (line drawing displays with light pens, called IMLACs) connected via a local network for the instructional part of the center.

Herb was very instrumental in the successful launch of the ICGC.  Although I had done research in interactive graphics before joining RPI, Herb was the world-class authority in a much more broadly based and fundamental research area that included computer graphics, imaging, and fundamental computer operations.  Through many discussions, Herb helped me avoid pitfalls.  He provided me with key contacts that led to the establishment of the Industrial Affiliates Program in the center.  He also opened doors to key researchers that helped solidify our research program, leading to significant NSF support.  His IBM research contacts helped motivate our research in geometric modeling.  Herb’s graduate students assumed early leadership roles in the instructional portion of the center.  As a highly regarded member of the governing body of IFIP ((International Federation for Information Processing), Herb provided me with strategic contacts and invitations in Europe that ultimately involved RPI in leadership roles in IFIP that lasted for many years.  Herb’s Adage graphic display system at the time was among the most advanced such system on the market.  With Herb’s encouragement, I approached Adage to become involved in our center.  Not only did they join our industrial program, but ultimately gave me a seat on their Board of Directors.

Herb was very instrumental in attracting to RPI, Randolph Franklin then a young promising Harvard researcher in computer graphics and geometric computation.  Herb also made imaging an important focus for faculty research at RPI.  I can still remember long discussions at our faculty meetings where Herb insisted we add the word “computer” to the name of our department -- including the comma after computer -- to the current name: Electrical, Computer, and Systems Engineering.

As the above paragraphs highlight, I owe much of my early beginnings at RPI to Herb’s influence.  When we step back and include all of the other situations where Herb clearly had significant impact, we can truly say that RPI is a better place because of Herb Freeman.

Dr. Freeman was my mentor, and supported me even after moving to Rutgers.  It was always a relief to get to Cranbury, and off the New Jersey turnpike.  I recall that Joan encouraged me to stay for lunch on more than one occasion.  He was an inspiring Ph.D. supervisor, and left a lasting legacy through his writing and his former students.

Herb had a profound impact on my life and I was lucky to live close to him in Princeton last few years and meet him from time to time.

Herb had a remarkable career starting with industry, Sperry Gyroscope, where he built their first computer in 1958, and then his transition to academia via MIT Lincoln Labs. He spent 36 years combined at NYU, RPI and Rutgers with 36 Ph.D.students and then founded a company called MapText after retirement that developed several products for map labelling. The company was acquired by Lufthansa for generating airport approach and departure maps, navigation maps that pilots carry in their laptop. I have known Herb since 1973 when I was an undergraduate student at the NYU School of Engineering and Herb was the ECE Dept. Chairman. Over the course of these 47 years, he was a teacher, mentor and a friend with remarkable wit, wisdom and intellectual curiosity.