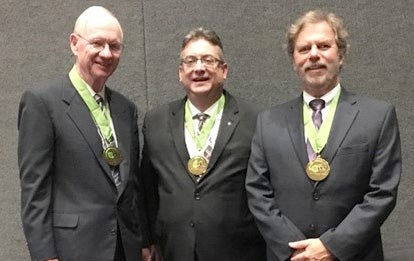 From left to right: Carson Taylor, John Paserba, and Nicholas Miller pose with their medals after the awards ceremony in Portland, Oregon.

for engineering deployment of control systems and solutions to improve power grid stability. John Paserba (‘88), the Meritorious Service Award for sustained technical and professional contributions to the power industry and PES. The Ramakumar Family Renewable Energy Excellence Award was given to Nicholas Miller (‘79 and ‘80) for modeling, performance analysis and advanced control developments of wind turbine generators and large-scale renewable integration.

Miller is recently retired from General Electric where he led the efforts to develop controls for large-scale coordination of wind and solar generation with other system resources as the senior technical director. He holds around 20 patents related to the control of renewable resources.

Taylor, who is a member of the National Academy Engineering, previously received the IEEE Herman Halperin Electric Transmission and Distribution Award and retired from the Bonneville Power Administration as its principal for transmission operations and planning.

Paserba was also a former recipient of an IEEE PES award. He received the Nari Hingorani FACTS Award and is the vice president of the Power Systems Group at Mitsubishi Electric Power Products.

Sabin, Taylor, and Paserba completed masters of engineering degrees at RPI, while Miller obtained both bachelors and masters in engineering during his time at the Institute.