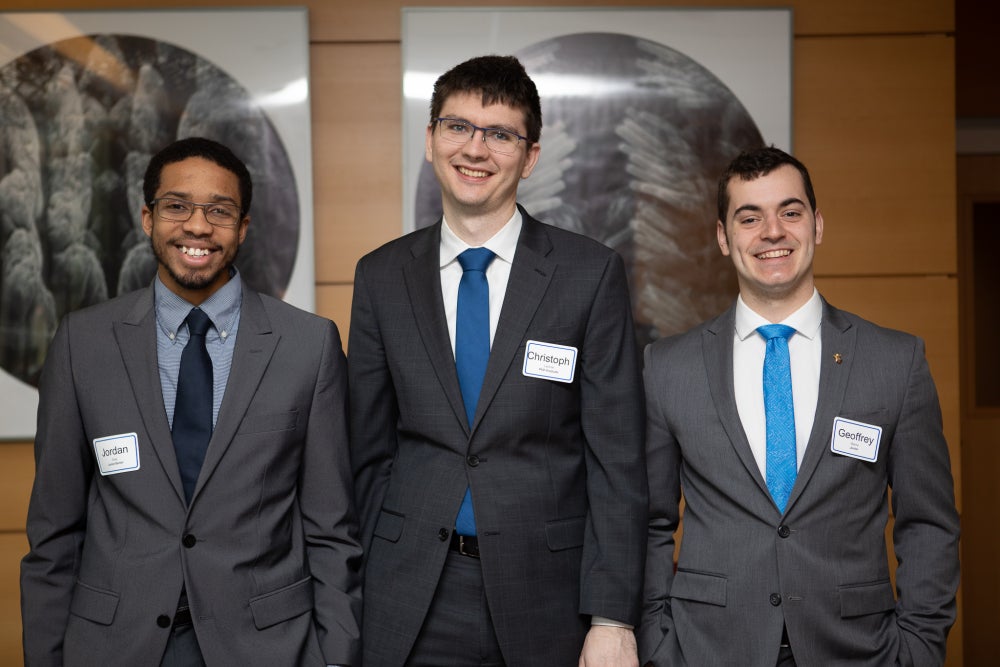 Lackner, Grey, and Warne
Christoph Lackner, Jordan Grey, and Geoffrey Warne were the 2019 recipients of the prestigious Grainger Scholars Award.

On April 12, at the annual Grainger Scholars ceremony, three ESCE students received the prestigious Grainger Scholars Award, which is given every spring in the amount of $7,500 for junior undergraduates entering their senior year and $10,000 for current ECSE co-terminal, Master’s, or Ph.D. students. Funding for the awards is provided by the Grainger Foundation, a private organization based in Lake Forest, IL which supports U.S. technical education and workforce development. The foundation has been awarding this scholarship to RPI students in the electric power field for the last fourteen years. ECSE awardees must demonstrate superior academic performance and future promise for work or research in the field of energy sources and systems, especially electric power.

Professor Joe Chow, chair of the RPI Grainger Scholarship committee and Campus Director, NSF/DOE CURENT ERC (Center for Ultra-wide-area Resilient Electric Energy Transmission Networks), spoke about exciting new directions taking place in the field of power before introducing this year’s guest speaker, Reigh A. Walling, RPI alumnus (B.S. 1974, M.Eng, 1979) and president of Walling Energy Systems Consulting. Mr. Walling addressed the 2019 recipients and shared insights from his 32 years in the GE Energy Consulting business group, where he performed pioneering research before starting his own consulting company in 2012.  He is an influential member of the IEEE 1547 standard writing group, and has been chair of the IEEE Power and Energy Society Working Group on Distributed Generation.

Christoph Lackner, this year’s graduate recipient, was also an RPI undergraduate who noted: “Throughout my undergraduate career at RPI I was exposed to a variety of fields within electrical engineering. However, the classes and topics that stuck with me were those covered in “Electric Energy Systems, a Power Systems Analysis.” The initial interest in those classes led to an internship at ISO-NE, and a continued interest in the area of Power and Energy Systems.” Lackner’s graduate research with Professor Joe Chow focuses on using synchrophasor data to evaluate power system equipment performance.

Jordan Grey, currently a junior, earned an A.S. from SUNY Westchester Community College before transferring to RPI in fall 2017. Describing his research with Professor Luigi Vanfretti, he says: “I’ve seen that there is room in the power field to adapt in the digital age and to impact how information and systems can operate effectively using other advancements made in the field of engineering. For the future, I plan to implement what I’ve learned in software and control systems and apply it to the growth of renewable energy.”

Geoffrey Warne, also a junior, was always fascinated by the process of converting electricity to power: “When choosing a concentration at RPI… I chose power because I want everyone to have the blessing of electric power in their household, no matter where they are or what time it is. And with a little guidance, we can accomplish this goal in a renewable and sustainable manner.” His particular research interest is the problem of creating uninterruptible energy from renewable sources (e.g. solar, wind, and hydro), and described how the process could apply to a device such as an insulin insulator in communities with limited access to the power grid.