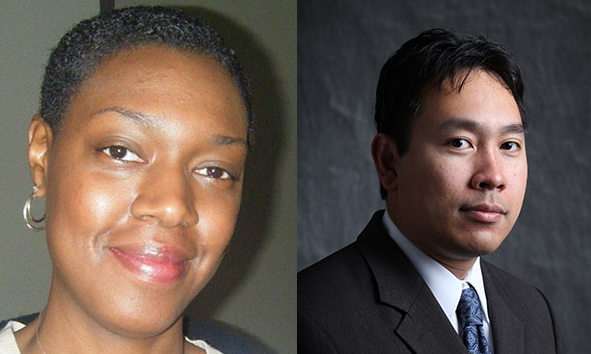 ECSE faculty Shayla Sawyer and Agung Julius were promoted to full professorship in December 2021 in recognition of their scholarly achievements, high quality education and teaching, and service to the department, the Institute, and the profession.

Prof. Sawyer received her B.S. in Electrical Engineering from Hampton University in 2003 and Ph.D. in Electrical Engineering from Rensselaer in 2006.  Her research focuses on developing fundamental understanding and processes for hybrid inorganic/organic materials for optoelectronic devices and sensors.  Her recent research on sensor development to better understand the harmful algal blooms was featured here.

Prof. Julius received his B.Eng. in Electrical Engineering in Institut Teknologi Bandung, Indonesia in 1998 and M.S. and Ph.D. in Applied Mathematics in University of Twente, the Netherlands, in 2001 and 2005, respectively.   From 2005-2008, he was a post-doctoral researcher at the GRASP Lab, University of Pennsylvania.  His research is in the field of systems and control.  He has established an influential body of work in hybrid systems and systems biology.   His recent research on controlling circadian rhythm using light was featured here