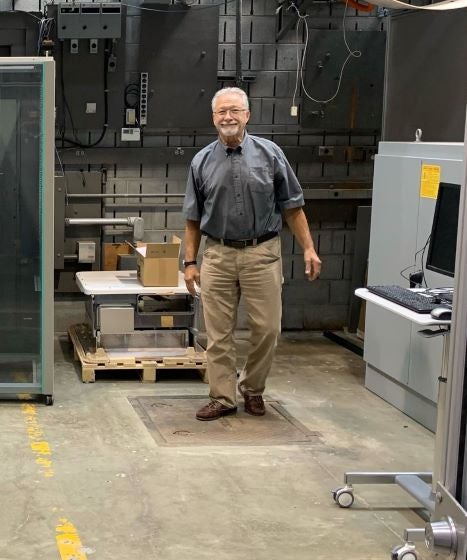 It is with tremendous sadness that we share the news that long time ECSE lab and classroom manager Jerry Dziuba passed away peacefully on October 28, 2021.  Jerry was with Rensselaer and ECSE for 47 years.  He was dedicated, capable, helpful, and generous – a true pillar of ECSE.   His obituary may be found at New Comer Family Obituaries - Jerry Dziuba 1951 - 2021 - New Comer Cremations & Funerals.

There was an outpouring of grief and remembrance of Jerry.  Some of the comments are quoted below:

Mona Hella: “Jerry is a very special person. He loved what he was doing and took care of everything. Without him, I would never have survived at RPI. He took care of the lab, teaching facilities, picked the mail, asked for quotes, fixed anything that could be fixed, I never had to tell him what to do. He just did what he believed was right, and it was always the right thing to do. My students loved him. He was resourceful and always excited about they do and ready to help. He will always be remembered. Anytime, I pass by the 4th floor, or by the Mercer Lab, I will always see Jerry with my heart.”

Luigi Vanfretti: “I would have not survived through RPI without him. He understood how hard it is to run an experimental lab and was terribly sympathetic to all the difficulties we faced, making his best to make my life and my students’ life easier. He was always involved in one way or another in my experimental research and contributed in such way that he is among the co-authors of several papers we wrote with the undergraduate research project students, that he always supported with immense patience.”

Joe Chow: “Jerry was such a nice person to make sure that everything would work right.  He was super reliable. Whenever I asked him to help me out, he would not forget and often closed the loop to make sure that he had solved the problem for me.  He was truly unique.”

Paul Schoch: “the there was one simple truth about Jerry that stands out, he always wanted the best for the students.  If something was wrong, he would go above and beyond to try to correct it.”

Don Millard: “Jerry was kind, thoughtful, and exceptionally competent - providing insightful and practical perspectives that were key to the achievement of ECSE’s initiatives…I am critically aware of how terribly understated and modest he was, yet how incredibly significant his efforts contributed to the success of the department, the institute, and – most of all – the education and preparation of a vast number of engineering students throughout the years.”

Agung Julius: “All of us who had labs during the pandemic would not have been able to do them without Jerry handling the logistics…In the last few months of his life, he got us through a pandemic and a flood in JEC. I will miss him. We will miss him.”

Ken Connor: “As everyone else came to know from their collaborations with Jerry, he made the lab courses possible. Nothing would have gotten done without his ability to gently, but effectively, show students and faculty how everything worked while also keeping everything working. He was a wonder.”

Shayla Sawyer: "Jerry asked me the same question every year for about a decade right in the beginning of the semester.  “When do you need the transformers?”  This particular lab was always at the end of the semester not the beginning and every single year I would struggle to give him an exact date.  Every year, I’d say, “When it gets closer, I’ll let you know.”  He’d smile and say, “Ok, just let me know!”  Every year I’d think, now that’s being prepared.  It just gave me a certain security that everything would be alright to have someone who cared about a seemingly simple but important task that far in advance.  This year, the transformer lab started right around the time of his passing.    I will miss this question from Jerry and our exchanges and the smile immensely.  He was an incredible colleague to have around keeping things in order.  He made everything easier so I could try to do something interesting or creative.  Thank you, Jerry for everything.  I can’t thank you enough for just being consistent and thorough and of service every day."