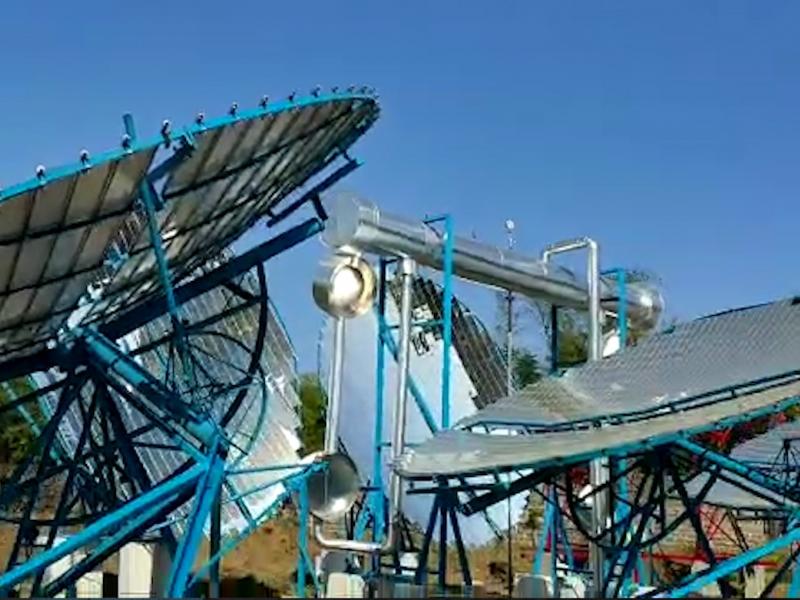 TROY, N.Y. — Partha Dutta, a professor of electrical, computer, and systems engineering at Rensselaer Polytechnic Institute, envisions a not-so-distant future where even the most remote parts of the world would have access to clean and renewable energy. His vision wouldn’t require a large power grid or expensive technology. Instead, he believes it could be accomplished using simple mirrors, local resources, and the sun.

“I call this ‘engineering for a better world,’ which means that you have to use affordable, accessible, and adequate resources,” Dutta said.

Dutta’s design generates heat by capturing sunlight, which then is used to convert water into steam. That steam can be used to directly power a steam turbine, or in this system, it can be stored for later use.

Producing energy by concentrating sunlight is not entirely new. But what sets Dutta’s concept apart from other concentrated solar power plants, he said, is that his plant is simple to construct, relies on local materials, and doesn’t require the use of molten salt, which can cause corrosion within the system’s pipes. These features mean lower assembly and maintenance costs, which would make a major difference for many communities.

“We’ve designed a concentrator that can be made out of small mirrors, which is very inexpensive,” he said. “It can be made by a local labor force, without special training.”

Finding an alternative to the molten salt typically used in such systems was a critical step. Dutta and his research team at Rensselaer studied hundreds of different materials, focusing on how well each material stores heat. Dutta took that information to the field in order to find natural and abundant materials in Bhopal that most closely match ideal thermal properties uncovered in the lab.

What he found were earth-abundant thermal rocks that were placed inside a tank for heat storage — a key element for ensuring energy can be produced at any time of day. At night, for instance, when energy from the sun isn’t available, the heat stored within the rock material will convert water into steam to be used for electricity.

Dutta sees this system as a clean alternative to coal and fossil fuels that feed thermal power plants — in turn reducing greenhouse gas emissions. It could also usher in greater energy efficiency in industrial processes that require heat.

This energy independent, efficient, and sustainable system, he said, can be used anywhere — including in urban areas where demand for electricity is high. But Dutta believes the largest potential is in bringing power to areas across the globe that currently have no access to electricity.

“It’s a clean way of generating power,” Dutta said. “The potential is expansive. With this energy source, you can do heating, you can do cooking, you can create electricity, you can do water purification, which is a very big thing in many parts of the world.”

Dutta plans to expand this research. He hopes to demonstrate a megawatt-scale plant within the next year or so, in order to continue to show the potential of this environmentally and financially friendly approach to producing solar energy. He is also looking to create high temperature supercritical steam through this process — a move that would increase efficiency of electricity generation by steam turbine.