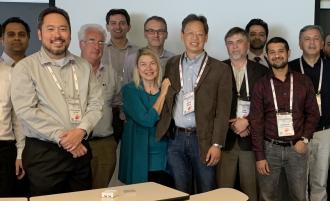 John Wen, the head of the Department of Electrical, Computer, and Systems Engineering at Rensselaer Polytechnic Institute, was recently honored at an Institute of Electrical and Electronics Engineers (IEEE) workshop on advances in the fields of control and smart automation, an area in which Wen has made significant contributions.

The workshop, titled Frontiers in Control and Smart Automation: Robotics, Energy, and Education, was organized by fellow Rensselaer faculty and held during the 2019 IEEE International Conference on Automation Science and Engineering held in Vancouver. It was planned in celebration of Wen’s 60th birthday.

In the workshop description, the organizers said of Wen, “His impacts can be measured not only in the number of scientific awards, publications, and citations, but also in the young researchers that he has mentored and trained.” The event brought together his colleagues, collaborators, and mentees, with presentations on robotics, controlling lighting in smart buildings, and automation in 3D printing, among other topics.