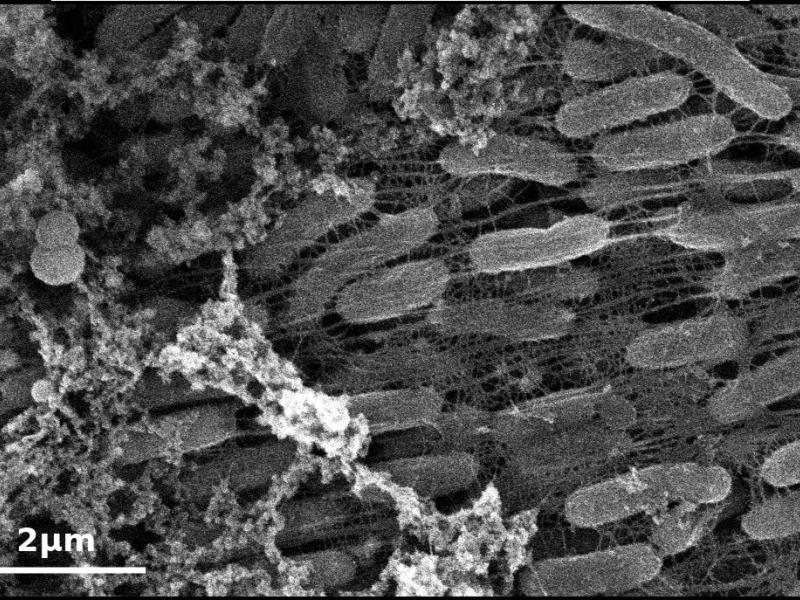 TROY, N.Y. —When the Shewanella oneidensis bacterium “breathes” in certain metal and sulfur compounds anaerobically, the way an aerobic organism would process oxygen, it produces materials that could be used to enhance electronics, electrochemical energy storage, and drug-delivery devices.

The ability of this bacterium to produce molybdenum disulfide — a material that is able to transfer electrons easily, like graphene — is the focus of research published in Biointerphases by a team of engineers from Rensselaer Polytechnic Institute.

“This has some serious potential if we can understand this process and control aspects of how the bacteria are making these and other materials,” said Shayla Sawyer, an associate professor of electrical, computer, and systems engineering at Rensselaer.

The research was led by James Rees, who is currently a postdoctoral research associate under the Sawyer group in close partnership and with the support of the Jefferson Project at Lake George — a collaboration between Rensselaer, IBM Research, and The FUND for Lake George that is pioneering a new model for environmental monitoring and prediction. This research is an important step toward developing a new generation of nutrient sensors that can be deployed on lakes and other water bodies.

“We find bacteria that are adapted to specific geochemical or biochemical environments can create, in some cases, very interesting and novel materials,” Rees said. “We are trying to bring that into the electrical engineering world.”

Rees conducted this pioneering work as a graduate student, co-advised by Sawyer and Yuri Gorby, the third author on this paper. Compared with other anaerobic bacteria, one thing that makes Shewanella oneidensis particularly unusual and interesting is that it produces nanowires capable of transferring electrons.

“That lends itself to connecting to electronic devices that have already been made,” Sawyer said. “So, it’s the interface between the living world and the manmade world that is fascinating.”

Sawyer and Rees also found that, because their electronic signatures can be mapped and monitored, bacterial biofilms could also act as an effective nutrient sensor that could provide Jefferson Project researchers with key information about the health of an aquatic ecosystem like Lake George.

“This groundbreaking work using bacterial biofilms represents the potential for an exciting new generation of ‘living sensors,’ which would completely transform our ability to detect excess nutrients in water bodies in real-time. This is critical to understanding and mitigating harmful algal blooms and other important water quality issues around the world,” said Rick Relyea, director of the Jefferson Project.

Sawyer and Rees plan to continue exploring how to optimally develop this bacterium to harness its wide-ranging potential applications.

“We sometimes get the question with the research: Why bacteria? Or, why bring microbiology into materials science?” Rees said. “Biology has had such a long run of inventing materials through trial and error. The composites and novel structures invented by human scientists are almost a drop in the bucket compared to what biology has been able to do.”