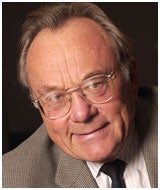 Hermann Haus became one of the world’s foremost authorities on optical communications, providing seminal contributions to the understanding of quantum optics, instrumental to the development of medical imaging, laser surgery, and optical communications. A native of Slovenia, he earned degrees at Union College, Rensselaer, and MIT before joining the faculty at MIT, where he was a leader in research and teaching for nearly a half-century.

His trailblazing work in quantum optics ranged from fundamental investigations of quantum uncertainty, as manifested in optical communications, to the practical generation of ultra-short optical pulses. Ultra-short laser pulses find applications in eye surgery, medical imaging, and precision clocks, as well as in ultrafast instrumentation and fiber-optic communications.

The fiber-optic undersea cables that provide rapid voice and data communications between the U.S., Europe, and Asia are the result of the pioneering investigations of Haus and fellow researchers at AT&T Bell Laboratories, and Nippon Telegraph and Telephone Research Laboratories.