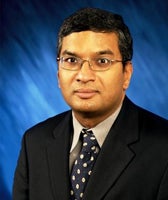 Nambirajan (Nambi) Seshadri is honored for contributions to wireless communications theory and the development of mass market wireless technology.

Nambi Seshadri was elected to the National Academy of Engineering for his contributions to wireless communications, an honor considered among the highest of professional engineering distinctions.  In 2018 he was awarded the IEEE Alexander Graham Bell Medal, the highest honor conferred by the IEEE in the field of communications and networking.