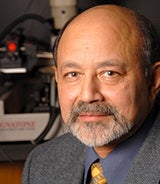 B. Jayant Baliga is an internationally recognized expert on power semiconductor devices, best known for his invention of the insulated gate bipolar transistor (IGBT), a power-saving switch device that has revolutionized the field of power electronics. With high efficiency and fast switching, the energy-saving device controls the flow of power from an electrical energy source to any application that needs energy, and is widely used in transportation, lighting, medicine, defense, and renewable energy generation systems.

The IGBT, which Baliga developed while working at General Electric in the 1970s, is used in an array of products, from cars and refrigerators to light bulbs, and is a critical component enabling compact cardiac defibrillators. The device has saved consumers trillions of dollars, reduced environmental pollution, and helps form the basis for the smart grid. Among his many honors, Baliga was named one of “eight heroes of the semiconductor revolution” by Scientific American magazine in 1997. He received the National Medal of Technology and Innovation in 2010.