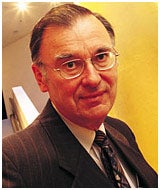 Ted Hoff, who has had a lifelong fascination with electronics, today is part of electronics industry legend.

In 1968 he joined the fledgling Intel Corporation where he was the first to recognize that Intel’s new silicon technology might make a single-chip central processor possible if a sufficiently simple architecture could be developed. Hoff developed such an architecture with just over 2,000 transistors.

Hoff is a member of the National Inventors Hall of Fame.