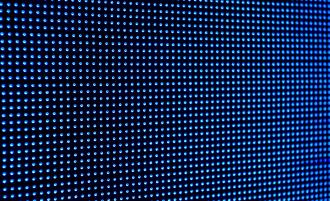 A new LED design, the details of which were recently published in Science Advances, provides a promising layout for future LED — light-emitting diode — technology, one that solves the challenge of declining brightness at higher energy levels, known as efficiency droop.

The new fin-shaped geometry was designed by a team of engineers from the National Institute of Standards and Technology (NIST), Rensselaer Polytechnic Institute, Maryland NanoCenter at the University of Maryland College Park, and IBM T.J. Watson Research Center.

“I believe that this is a new paradigm,” said Michael Shur, a professor of electrical, computer, and systems engineering at Rensselaer, who is one of the authors on this research paper. “Using this paradigm, you could dramatically improve LED performance.”

Previous LED pixel designs performed well at low powers, but at higher powers the efficiency greatly dropped, Shur said. The problem, he explained, rested in a bottleneck of sorts when an increased density of electrical current tried to move through a semiconducting material. In conventional LEDs, at high-current densities, more energy goes to heat instead of producing light.

“In the FIN LED geometry, this challenge is addressed,” Shur said. “The electron current in the Fin LED is better matched by the hole current — the current of positive charged carriers — supplied to the fin from a much larger area.”

Shur believes the Fin LED design could be applied to infrared and deep UV LEDs as well. He is particularly interested in more efficient and more powerful deep UV LEDs for improved sanitation of medical supplies and public spaces, improving crops, reducing waste via improved produce storage, water purification, and efforts to fight the COVID-19 pandemic.