Sun received his Dr.-Ing. degree from the University of Paderborn, Germany. Before joining the faculty at Rensselaer in 2002, he was a Principal Engineer at the Advanced Technology Center of Rockwell Collins where he worked for five years. Prior to that, he was a Post-Doc Fellow at Georgia Institute of Technology from 1996 to 1997. He is currently a Professor of the ECSE Department and Director of the Center for Future Energy Systems (CFES) funded by New York State government. Sun’s research is in the general area of power electronics, with an emphasis on modeling and control as well as applications in aerospace, IT, and power systems. His recent research focus has been on power electronics for renewable energy, high-voltage dc (HVDC) transmission and other power system applications. He is credited with developing the small-signal sequence impedance theory and solving real-world stability problems in renewable energy, HVDC transmission, and data center power systems based on his theory. His theory has also served as the basis for new grid codes and industry standards for power electronics in power systems. He collaborates with industry internationally in these areas. As Director of CFES, Sun is responsible for all major missions of the Center, comprising of research, education, technology development, outreach, as well as collaborations with industry and other institutions. The Center supports half a dozen research and administrative staff members and works with faculty across Rensselaer on a broad scope of basic and applied research related to energy, ranging from advanced materials and devices for energy storage and energy efficiency, to renewable energy, and to power systems. Sun is a Fellow of IEEE and is active in the IEEE Power Electronics Society (PELS). He was the Editor-in-Chief of IEEE Power Electronics Letters from 2008 to 2014 and served in numerous other editorial boards and conference committees. He is currently the Treasurer and a Distinguished Lecture of PELS. He also received several awards from the IEEE Power Electronics Society, including the Modeling and Control Technical Achievements Award (2013) and the R. David Middlebrook Achievement Award (2017). He has more than 200 publications and holds 11 US patents and 1 European patent. 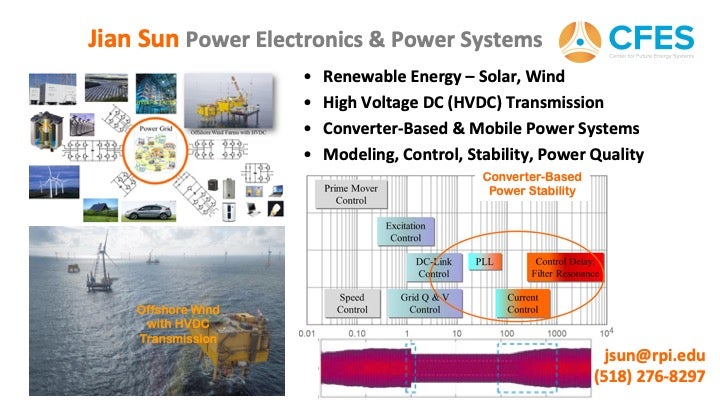 Renewable energy transmission by HVDC across the continent (2017)

On the zero-crossing distortion in single-phase PFC converters (2004)